North Carolina has surpassed 1 GW of installed solar capacity, the fourth US state to do so, according to the North Carolina  Sustainable Energy Association.

“Solar has been a fantastic economic driver in North Carolina’s clean energy industry for the past several years, and reaching one gigawatt is the latest impressive milestone for this growing market,” said Robin Aldina, NCSEA’s Manager of Energy Research.

The NCSEA places much of the credit for the state’s successful solar industry at the feet of its strong energy policies, which include a Renewable Energy and Energy Efficiency Portfolio Standard (REPS) and a Renewable Energy Investment Tax Credit (REITC). 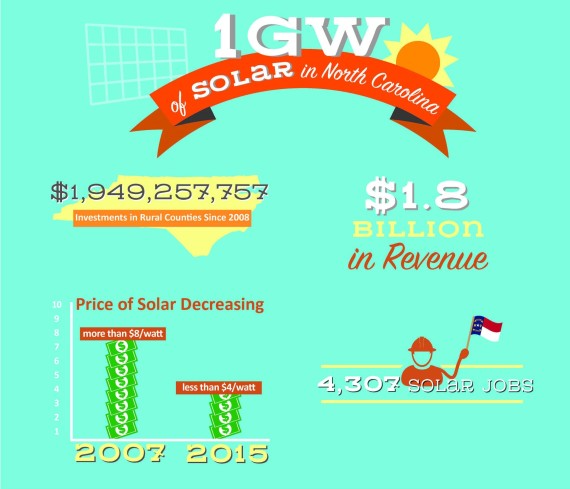 Interestingly, North Carolina’s strong energy policies may be a thing of the past, according to the NCSEA, which noted that the North Carolina General Assembly recently determined to include a sunset of the REITC provision in 2016’s budget.

“This policy shift is not the first time our clean energy economy has faced challenges,” said Allison Eckley, NCSEA’s communications manager. “However, we know this is a resilient industry. North Carolina clean energy firms have overcome multiple policy threats in an uncertain business climate to achieve tremendous growth in jobs and revenues since 2008.”

“Firms indicate factors such as the quality of research and development collaboration, and the impact of our Renewable Energy Portfolio Standard – which remains intact and on track to reach its goals by 2021 – are key contributors to this growth. We see a bright future for North Carolina’s one-gigawatt solar market, and the host of other clean energy and energy efficiency resources driving our energy economy forward.”

Earlier this month, a coalition of small-scale North Carolina-based solar energy providers sent an open letter to Duke Energy, headquartered in Charlotte, North Carolina, and the largest electric power holding company in the United States, asking them to publicly back a two-year extension of the REITC.

An end to the unimpeded growth of North Carolina’s solar industry will be disappointing, especially considering the recent success the state has had. Just last month US solar power company Principal Power announced that it was teaming up with Entropy Investment Management to co-develop its first major solar project, to be located in Cumberland County, North Carolina. The project will generate the equivalent electricity needed to supply 20,000 average US homes, with construction already under way.

Yingli Solar Signs 300 MW Worth Of Solar Projects In China