In an election year in which one candidate is hell bent on expanding the use of coal as an energy source, a new poll by the Pew Research Center shows that 89% of all Americans favor expanding the use of solar power to make electricity thanks to its many benefits. This finding means that the vast majority of US citizens support solar power regardless of age, political affiliation, class, race, or sex. The Pew Research Center report also found that 4% of homeowners have a rooftop solar system. Many more — 40% — say they have given serious thought in the past 12 months to adding one. 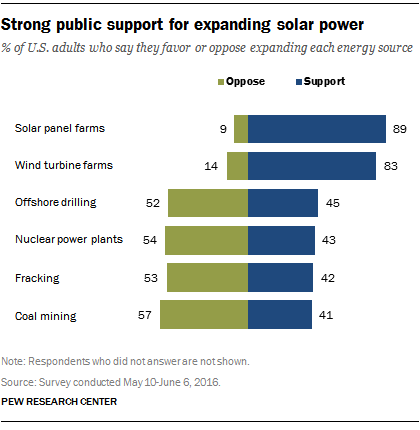 Homeowners living in the western half of the country are more likely to say they are considering adding rooftop solar panels. 52% said the thought has crossed their mind. 14% already have a residential solar system on their home.

Compare that to people in the east: Only 2% of them have a solar system already and just 37% say they have seriously considered it.

The US Energy Information Agency says it expects 9.5 gigawatts of electricity from large-scale solar farms to be added in 2016, with another 2 gigawatts from distributed solar sources such as rooftop solar. Total demand for electricity in the US stands at about 1,070 gigawatts, which means solar power only accounts for about 1% of all the electricity used in this country despite recent advances.

The EIA says that California leads all states in distributed solar power with about 40% of the total. Arizona is ranked 3rd and Hawaii is ranked 6th. The popularity of rooftop solar in California and Hawaii correlates with the fact that both states have well-above-average electric rates. They also get more sunshine than many other states.

The Pew research shows that homeowners consider both the financial benefits and environmental benefits when thinking about installing solar systems on their homes. 90% said they have installed or considered home solar panels in order to save money on utility bills and 87% say they did so to help the environment. An interesting finding is that only 60% said that the solar investment tax credit was a factor in their deliberations about solar power. Perhaps that is because many solar companies roll all incentives into the final cost of the systems, so people are not directly aware of the federal 30% tax credit.

If Donald Trump was really interested in making America great again, he would be advocating for a massive increase in installed solar power so American industry could benefit from lower energy costs and a faster-growing economic sector. That would make American made products more competitive in global markets. Instead, he is worried about protecting fossil fuel companies that pollute our air, water, and land.

Republicans are always bleating about how we can’t afford more solar power. The truth is we can’t afford not to greatly expand our solar power facilities so that our children and grandchildren can grow up in a world that promotes healthy living.