With all the attention being paid to Panasonic and its partnership with Tesla in the GigaFactory under construction in Nevada, people sometimes forget that there are other battery companies in the world. So it comes as a surprise that Toshiba grid storage batteries will be used at a new energy storage installation near Hamilton, Ohio, according to Business Wire. 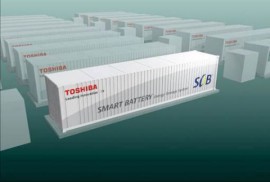 Toshiba announced April 21 that it would partner with Sumitomo Corporation, Sumitomo Corporation of America and Renewable Energy Systems America, a US renewable energy developer to construct the Ohio BatteryEnergy Storage System (BESS). The batteries are scheduled to be delivered in November and will be placed in service shortly thereafter.

The array of large lithium-ion batteries will assist local utilities to smooth out frequency variations on the electrical grid. Toshiba says its SCiB™ battery is a highly innovative lithium-ion secondary battery, distinguished by its long-life and excellent performance. It can charge and discharge efficiently and reliably over a wide range of temperatures, both high and low. Its ability to last for more than 10,000 discharge cycles gives it an unusually long service life.

Toshiba is promoting BESS globally as an effective tool for ironing out frequency fluctuations and supporting stable power networks. It has already supplied batteries for projects in Japan and around the world. In fact, the Ohio project its its 9th megawatt or larger grid scale endeavor. Toshiba is the battery supplier for a large grid scale energy storage system in Japan, the 40 MW installation at the Nishi-Sendai Substation operated by Tohoku Electric Power Company. That facility went into operation on February 20th, 2015. It is not only the largest such battery storage system in Japan, it is also the largest in the world.