Trina Solar, the world’s largest solar panel manufacturer, will begin selling residential storage batteries in Australia in June of this year. The batteries include a built-in inverter and are priced at around $1,200 per kilowatt-hour. Sharp-eyed readers will realize that is far more than the price quoted for the Tesla Powerwall batteries, which were announced to great fanfare at the end of April. On the other hand, the Tesla products do not include the inverter, which can cost $2,000 all by itself. That said, solar panel systems typically have solar inverters.

Doug Smith, country manager for Trina’s Pacific region, said the company’s “soft launch” of the battery at the Australian Solar and Energy Storage conference in Melbourne last week was not in response to the Tesla’s blockbuster announcement. But he did admit that the news had given the market a huge  boost. “Tesla’s certainly doing the world a favour here, for sure,” Smith told RenewEconomy in an interview. “They’ve done a great job in such a short amount of time.”

Smith says the company made the strategic decision to get into energy storage more than 18 months ago, when it formed a new division called Trina BEST. It has been working on the batteries for 12 months at a purpose-built facility in Jiangsu, near Shanghai. The company plans to release grid and microgrid models in the coming year and add commercial models soon after that. The Trina BEST lithium-ion battery components are sourced from ETL, an established and highly regarded battery manufacturer. 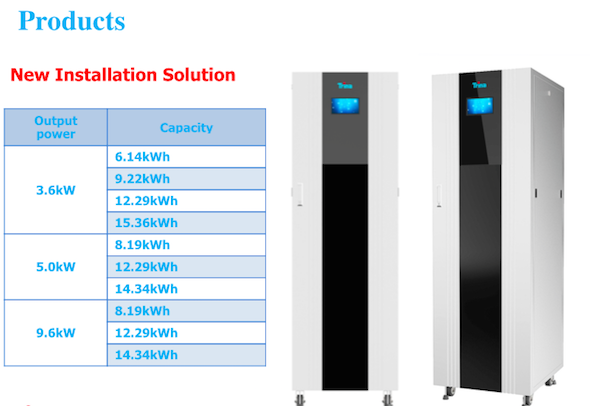 In addition to developing its line of residential and commercial batteries, the company is looking at building electric vehicle batteries as well, but Smith says that is more of an “interesting end point” to the company’s battery story, rather than a concrete plan. For now, “This is a start,” he says. “It’s an aggressive play, but we’re not the only ones.”