New figures from EnergySage show that solar installation costs in the US for the first half of 2015 averaged around $3.79 per watt. 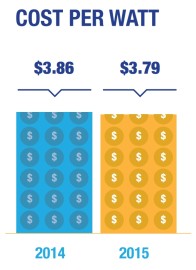 This is one of the primary conclusions from EnergySage’s new 2H 2014-1H 2015 EnergySage Solar Marketplace Intel Report, published this week, and focused on investigating the residential and small-scale commercial solar market. EnergySage bills the report as “a complement to the quarterly research produced by GTM Research and Solar Energy Industry Association, which centers more on industry-wide macroeconomic trends.”

Furthermore, EnergySage bills the insights gleaned from its EnergySage Solar Marketplace — the backbone of EnergySage’s data gathering — as “so exclusive that leading research and academic institutions such as National Renewable Energy Laboratory, Lawrence Berkeley National Laboratory, Solar Electric Power Association, and the University of Texas have all leveraged EnergySage data for their own research and analysis.”

“The residential solar market is a vibrant $7 billion industry, and on track to generate more revenue by year-end 2016 than Major League Baseball,” said EnergySage CEO Vikram Aggarwal. “The economics of solar are rapidly changing for solar shoppers, installers, and financiers alike. As demonstrated by the data within our Solar Marketplace Intel Report, it’s becoming more affordable for US households to adopt solar.

“And, with the increasing consumer adoption of marketplace solutions like EnergySage, it’s also becoming easier for solar installers and financiers to find their customers.”

Solar is serving to meet 85% of solar homeowners’ electricity needs in 2015, with an average 7.9 per kilowatt system generating about $2,000 worth of electricity annually.

Interestingly, EnergySage found that 90% of solar shoppers using EnergySage’s Solar Marketplace elected to own their system outright from the get-go, rather than leasing it — choosing to either pay in cash or finance with a solar loan, rather than sign up for a third-party lease or Power Purchase Agreement (PPA). 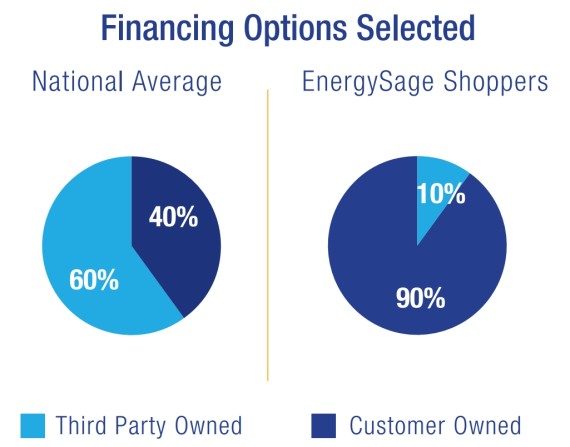